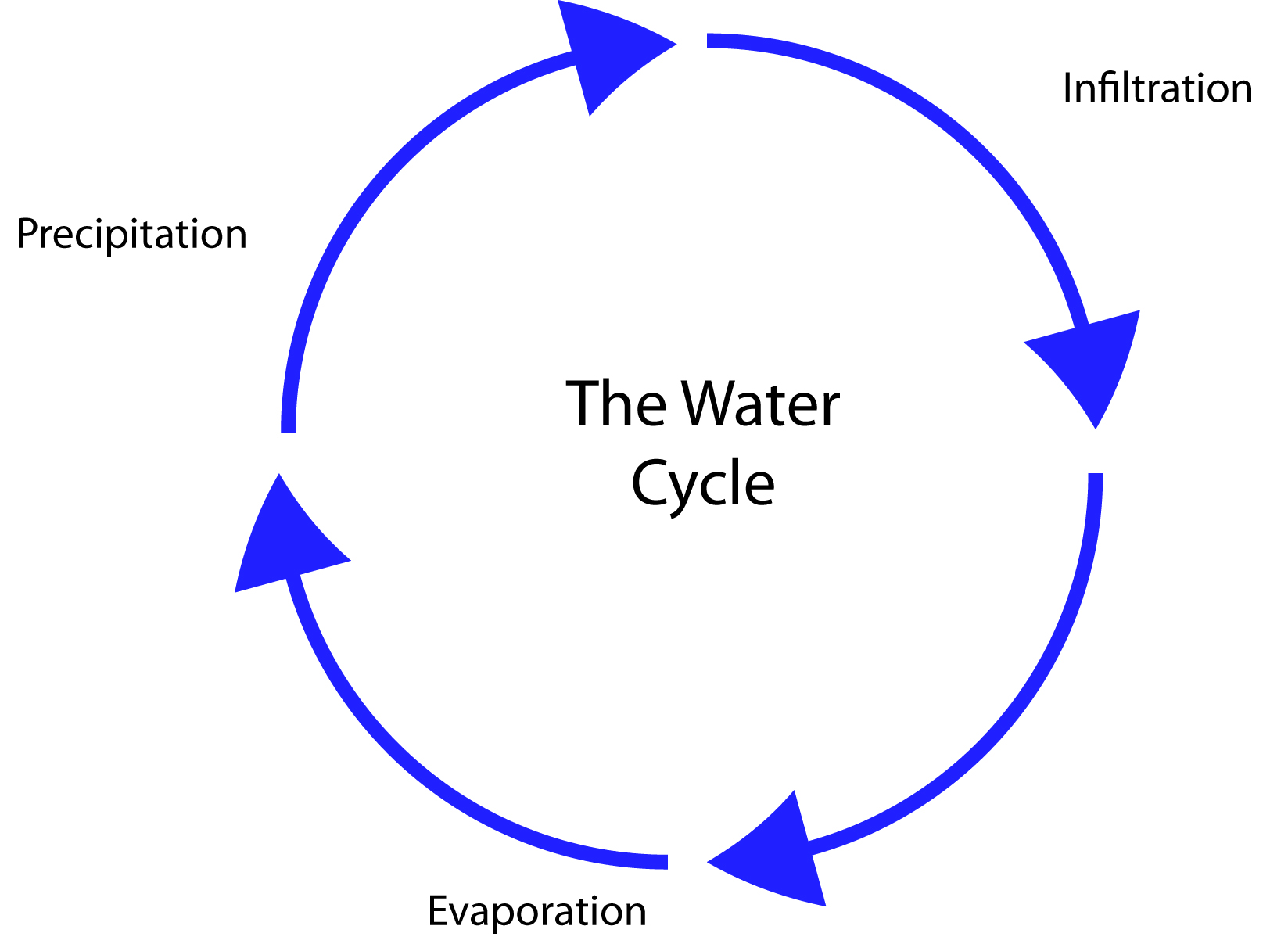 Because WaterShed began halfway through my graduate education, it seemed only natural that my master’s thesis in architecture be derived from my involvement with WaterShed and the Solar Decathlon. The thesis, “Designing for Water: Case Studies in the Chesapeake Bay Watershed,” presented strategies for four sites and buildings throughout the Chesapeake Bay watershed to increase the health of the Bay and its watershed and decrease the negative impacts the built environment has on the water cycle. The ultimate goal of the thesis was to understand how the ideals WaterShed aspired to could be made applicable to buildings all over the Chesapeake Bay watershed.

To start defining the problem, the thesis began with a clear explanation of what’s broken in the relationship between the water cycle and the built environment. The water cycle goes something like this: Water on the surface of rivers, lakes, streams, and oceans is heated by the sun and evaporates into the air as vapor. In addition to this vapor, plants and landmasses transpire to put water into the atmosphere. All of this vapor condenses as it cools into clouds which are moved at the whimsy of the winds. Once the clouds become heavy and laden with water, precipitation brings this water back down to the earth as snow, rain, sleet, and hail. This water feeds the plants which lets them grow, assists in the transit of nutrients in rivers and streams, and percolates underground to recharge aquifers. So far this is basically everything you learned in high school, but here comes the twist…

As is true of most idealized cycles, this ideal relationship almost never occurs because of the built environment humans have introduced into the landscape. When only 0% to 10% of the land area is covered by impervious hardscape, 40% of water that falls on the site immediately evaporates back to the atmosphere. Ten percent of precipitation in this situation runs along the surface, 25% feeds the plants, and an amazing 25% has the opportunity to reach deep infiltration and recharge groundwater resources. Increasing the amount of hardscape changes these figures significantly.

At its most extreme, when 75% to 100% of the land area is hardscape, almost no water is available for infiltration of any kind and most water, 55%, becomes runoff. Most of our urban and suburban environments have at least 75% hardscape and when most water becomes runoff, there’s less water available for helping the plants grow and recharging groundwater resources. Excess runoff is critically damaging to the natural environment and the success of our cities. When plants aren’t provided with water from rainfall, ecosystems are disrupted and every fish and animal that thrives because of those plants has difficulty surviving. Excess nutrients travel in the runoff and instead of feeding plants where the rain fell, they unbalance the nutrient content of bodies of water such as the Chesapeake Bay. In addition, many of our coastal cities are fed by groundwater resources far from the actual city itself. When water is allowed to become runoff it does not have the opportunity to recharge aquifers, and cities deplete their groundwater resources faster than they are able to recharge. If this cycle persists for too long, drought results and cities in the future could run out of water.

Our impervious built environment fundamentally changes the water cycle by displacing rainfall. Instead of a balanced process where water cycles relatively evenly between three steps, the cycle becomes unbalanced and far more water becomes useless runoff instead of productively feeding plants and recharging groundwater. Water unites the globe – we all need it to survive regardless of where we live. The built environment must respond to water concerns at every scale of design and development, from the macro global and regional planning scales to the micro detail scale.

So there you have it. The reason why we ought to be including features such as green roofs, permeable paving, native landscaping, cisterns, and all that jazz in our architectural and urban design work is because our built environment is breaking a natural cycle and the consequences affect everyone on the globe.