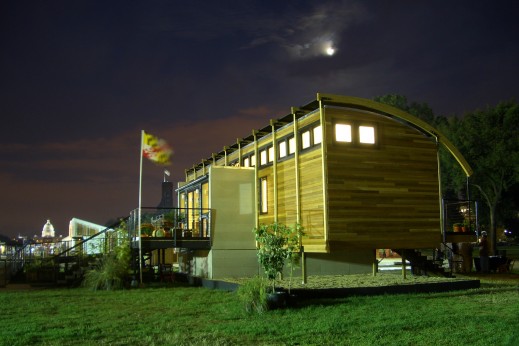 After competing against more than 40 teams in April 2010, the schematic design for Team Maryland’s WaterShed was chosen as one of 20 homes in the current U.S. Department of Energy Solar Decathlon. The 2011 competition is the fourth time the University of Maryland is participating in the Solar Decathlon, continuing the exploration of a more educated and sustainable future. WaterShed is born out of the University’s growing institutional knowledge on sustainability and renewable energy in the built environment. The project benefits from the continuity of a growing network of Solar Decathlon and UMD alumni.

Competing in the inaugural Solar Decathlon in 2002, Maryland’s initial design for the competition became a foundation for subsequent Maryland entries. The 2002 house placed fourth overall. In 2005, Maryland’s solar house won the People’s Choice and Solar Innovation awards and took eighth place overall. In 2007, Maryland’s LEAFHouse won the People’s Choice Award and received a host of other awards from industry and professional associations. Our best result yet, LEAFHouse placed second.

Today the 2005 and 2007 houses are still in use for educational purposes and continue to act as symbols of innovative building strategies that will lead us toward a more environmentally conscious tomorrow.

Please visit http://www.solardecathlon.gov/where_now.html to find out more about previous entries to the Solar Decathlon, where they are now, and how you can visit them to learn more about a sustainable future.