Over the past few decades, production of energy through the use of photovoltaic (PV) technology has increased. The past ten years have seen the largest growth in demand for PV modules, with a rate of 35% in 2010 and predicted rates of 20% or more through 2015.1 The majority of the PV market consists of silicon-based modules, most commonly constructed from crystalline silicon wafers.1 However, PV modules do not last forever; they have a life expectancy of about 30 years before they must be decommissioned.2 Failure of modules is often attributed to defects in the product, including “glass breakage, defect laminate, electrical defects, wrong designs, or process losses.”3

Currently, the end-of-life modules are treated as industrial waste in which the glass and metal components are recycled, but not the cells.3 As the quantity of solar-grade silicon decreases, simply throwing away old cells is becoming an increasingly cost-inefficient process. The majority of the discarded wafers are intact, and recycling methods have been developed by various research groups to refurbish old solar cells into new cells with similar efficiencies. 3, 4, 5 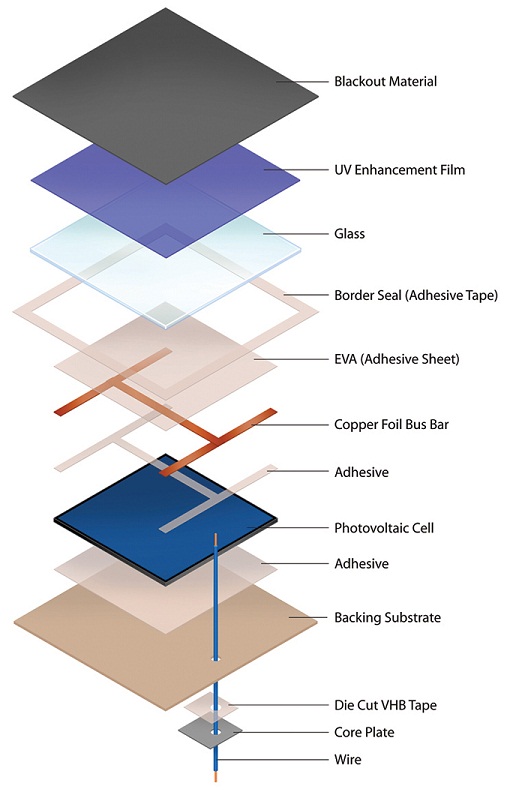 The same general recycling process is used by various companies. First, modules are broken down by removing the metal frames and glass plate, leaving the solar cell array sandwiched between an ethylene vinyl acetate (EVA) resin and back film. In order to get at the cells themselves, the resin and backing must both be removed. In 2000, a method to thermally remove these components was developed and optimized by the Frisson research group. It found pyrolysis in a fluidized bed reactor (Figure 2) is the best technique for an industrial-scale recycling process.4 In the reactor, very fine sand attains physical properties of a liquid due to the high temperature and low particle size. Wafer arrays are placed in this fluidized sand for 45 minutes at 450°C. The EVA and back films evaporate, and the vapor form combusts in the air portion of the reactor, acting as a heat source for the reactor. Eighty percent of cells separated by this process are mechanically intact. Once the EVA and back film are burned off, the cells can be physically separated and individually processed.3 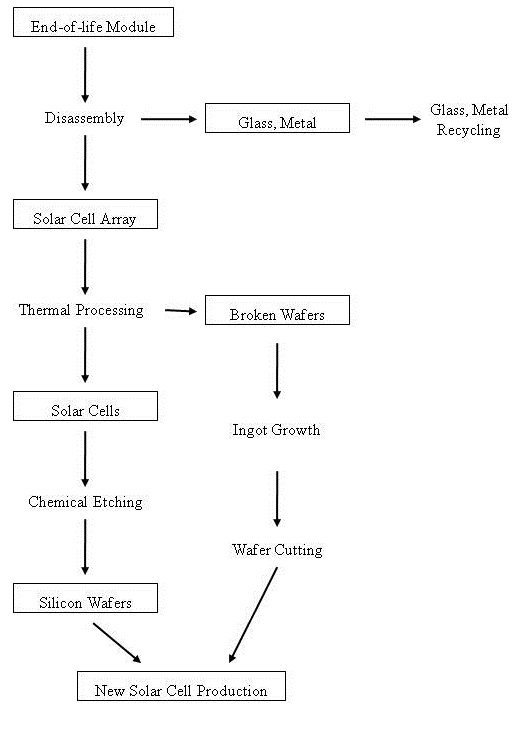 Annealing the cells in the fluidized reactor causes the efficiency of the solar cells to drop significantly.4 To generate new solar cells, the base silicon wafer needs to be isolated. Isolation is achieved by chemically etching away the various coatings and p-n junction added to the silicon wafer in the initial production process.5 Klugmann-Radziemska, et. al., optimized a sequence of etching steps that minimize cost while expediting the entire process.5 Compositional analysis of the wafer using an EDX spectrometer shows only silicon remained after the etching process.5 (See Figures 3, 4). Other groups have used similar processes to etch away the metal layers on the silicon wafers.3, 4 A slightly different etching sequence must be used to clean polycrystalline silicon wafers.4 Solar cells that are broken during the thermal delamination process should be etched clean as well, as the broken wafers can be melted and used to grow new silicon ingots.3 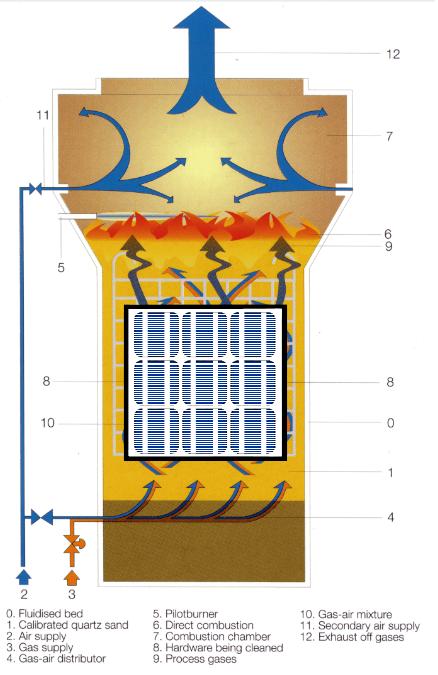 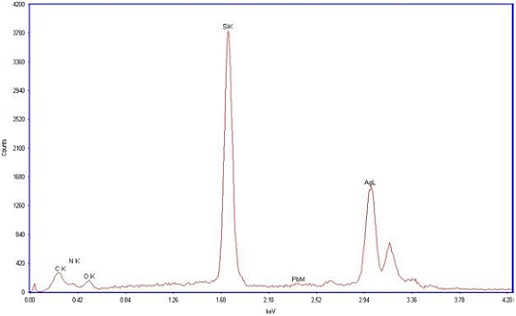 The PV modules have now been broken down into three major components: metal, glass, and silicon wafers. The metal and glass can be recycled using the current recycling infrastructure.6 Intact silicon wafers can be processed into new solar cells, using standard solar cells production processes including “texturization, emitter formation, parasitic junction removal, passivation, antireflection coating deposition, and front and back contact formation.”5 Multiple groups have reported solar cells created from recycled wafers have efficiencies similar – if not equal – to the originals.4, 5 Efficiencies of reprocessed monocrystalline cells ranged from 15% to 16.4%, and reprocessed polycrystalline cells had efficiencies ranging from 12.7% to 15.9%.4, 5 These efficiencies were compared to cells that had been recently manufactured. Deutsche Solar AG recycled PV modules installed in Germany in 1983, and efficiency increased from the original 8% to 14% due to improved cell processing technology.6 Based on these efficiencies, using silicon wafers reclaimed from end-of-life PV to create new solar cells is a viable recycling method.

One question to consider is whether or not recycling PV modules is an environmentally and economically efficient process. It has been demonstrated that the technological processes to recycle the modules are there, but do these processes reduce environmental burden and price of the modules? A life-cycle analysis of Deutsche Solar AG was conducted by Müller’s research group to determine environmental effects of the recycling process, as well as Energy Pay Back Time (EPBT) of new modules versus ones created using recycled solar cells.6 The study concluded the recycling process reduces the environmental burden of processing new silicon as well as the burden associated with disposing of the PV modules through more conventional means.6 (See Figure 5) The significant environmental burdens of the recycling process come from the thermal delamination process and etchant wastes.6 Groups like Klugmann-Radziemska are already working to create thermal processes and etching sequences that are more environmentally friendly than the existing methods.5 In addition to a lower environmental impact, Müller’s group determined that PV modules assembled from reclaimed silicon wafers are cheaper than those using new silicon wafers. The higher energy cost associated with processing new silicon wafers significantly contributes to the EPBT of new PV modules; eliminating this step by using reclaimed wafers cuts the EPBT by about half.6 (See Table 1). 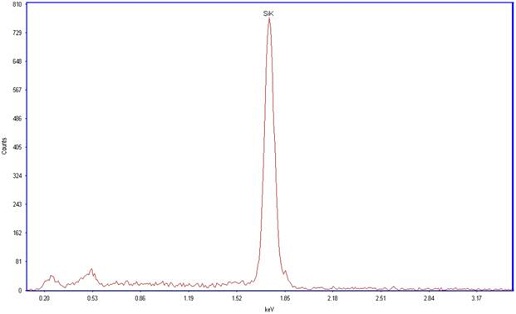 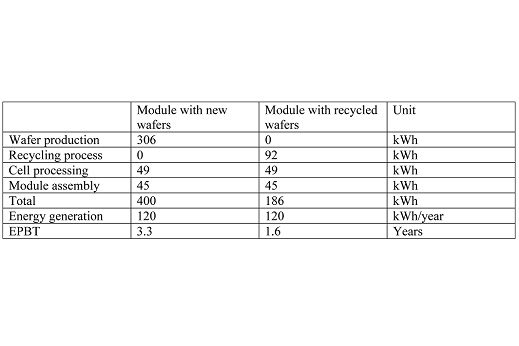 The main hindrance to PV recycling is the lack of a recycling infrastructure.2 This infrastructure should have two main parts: a method of pick-up and transportation of spent modules, and large-scale recycling centers to receive them. Due to the current widespread and decentralized network of solar energy production, collection of the end-of-life modules is the more difficult component of establishing a comprehensive PV recycling system.2 However, three solutions have been proposed to address this problem. In the first, collection and recycling of PV modules could be undertaken by utility companies, PV manufacturers, or electronic recycling centers. Utilities that own large solar arrays for power generation would be responsible for recycling their own PV modules or transporting them to a recycling center. Costs of recycling could be included in utility rates charged to customers.2 Unfortunately, the number of utility companies owning large solar arrays is low, therefore this method would only provide for recycling of a small fraction of the total PV modules in use.

The second proposed method parallels that currently used by the electronics and telecommunications industry.2 In this, manufacturers of PV modules would undertake the task of dismantling and transporting the end-of-life modules to a recycling center that supports other electronic waste as well. The manufacturer or consumer could pay the transportation costs, and the recycling center would profit from the sale of the recovered metals and silicon.

The most feasible method for private owners, though, is one similar to that used by the battery industry. In this, a collection group utilizes reverse retail chains or periodic pick-up to receive used PV modules. Consumers either bring their used PV modules to designated drop-off sites, or call for a truck to arrive on location. Several different payment methods were proposed, including initial payments for the service with purchase or payment at end-of-life.2 The modules would then be delivered to large recycling centers. The proposed methods may not effectively encompass all current PV owners, yet as the technology continues to grow there will be a higher incentive to create comprehensive collection networks for the end-of-life PV modules. 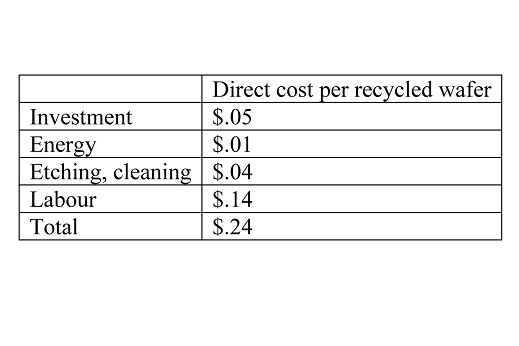 The creation of large recycling centers could be achieved by scaling up current recycling technologies. An assembly line type set-up comprising a conveyor belt furnace and an etching line cleans the wafers, and a typical solar cell processing line turns the wafers into new solar panels.3 Glass and metal from the disassembled module could be processed at these facilities or shipped to an existing facility better equipped to handle these types of materials. Large-scale electrolysis recovery of metals from the waste etchant solution provides an additional source of profit for the recycling process. 4 Currently, there exists a handful of companies that collect and recycle end-of-life PV modules but they are too small to handle the growing number of end-of-life PV modules on their own.2, 3, 6

Although WaterShed’s PV array consists of newly manufactured solar panels, the emerging field of PV recycling is still a fascinating and pertinent one. The growth of PV and microelectronics industries has put a strain on world silicon resources and is threatening to cause shortages in the near future. Processes have been developed to recover the silicon wafer from end-of-life PV modules and use it to produce new modules with efficiencies equal to or greater than the originals. The fact that end-of-life PV modules can be recycled adds to their “green” appeal and could be a significant driving force in the development of a comprehensive recycling infrastructure, the major hindrance to the recycling process. Continuing to optimize the recycling process as well as promoting the benefits is a way to both keep toxic waste out of the landfills and reduce new silicon use. 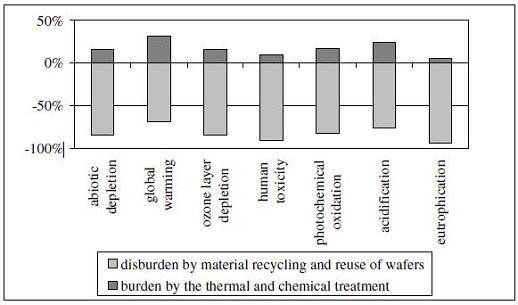