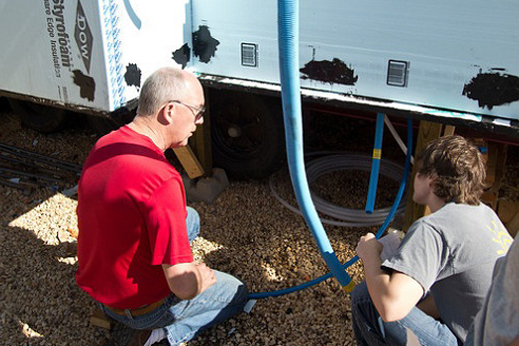 Fred Werth is exactly what everyone wants in a master plumber: he’s always there when you need him, he’s enthusiastic, talented, and generous with his time. So generous in fact, during the 2007 Solar Decathlon, where he served as a mentor for LEAFHouse, he pitched in to help several teams – not just Maryland – during the hectic assembly period.

A master plumber and gas fitter for more than 30 years, Fred has been helping the WaterShed team on several systems, including mechanical, solar, and water. He has worked closely with the students throughout the process, connecting them with suppliers and manufacturers in the business. Fred has been more than a great teacher – he has been a real partner for the team. Below Fred talks about the rewards of working with team WaterShed.

What do you hope the students take away from working with you on WaterShed?
FW: Mostly, I hope they have fun. But I also hope they come away with a sense of wonder, that they have created a beautiful structure that began as a dream in someone’s mind.

What have you learned from working with the students this year?
FW: I need to step back and let them do it.

How important are competitions like the Solar Decathlon in respect to the future of architecture, building technology, and construction?
FW: In my work, I often only see a small part of the picture; I see drawings of a building and have no idea how it will be built. With the Solar Decathlon the students actually see, sense, and touch every aspect of what they are creating. The S.D. is very important.

What do you hope people will take away from WaterShed when they visit it on the Mall in September?
FW: We have the ability to create and shape our future beautifully.