Building a carbon neutral, state-of-the-art, solar-powered house is not for the faint of heart. It takes a vast and varied team of talented individuals unified with a common goal to create and build something that inspires and educates people about the beauty and simplicity of living with the planet in mind. With most of the planning behind them, 2011 was all about bringing Team Maryland’s vision to life. Here’s a six-month look back at the evolution of WaterShed. 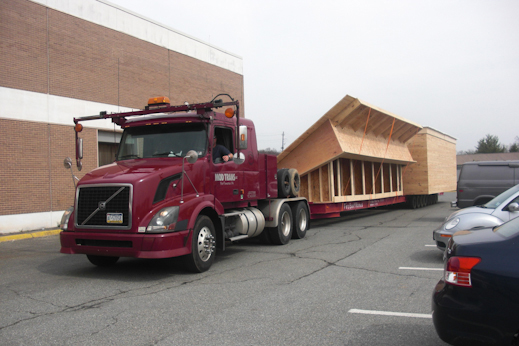 AT LAST, THE MODULES ARRIVE (March)
The warmer weather of spring brought a flurry of activity to the WaterShed construction site. After a winter assembly in Pennsylvania, the shed modules arrived to the site by truck and were craned into place to the sound of cheers from WaterShed team members. Sponsored by Maryland Custom Builders, Inc. and ProBuilt Homes, the March module arrival marked a major turning point in the construction process, transforming a year’s worth of planning into reality. 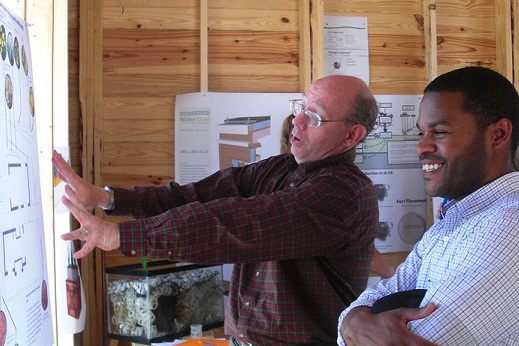 SHED-RAISING (April)
With the outer envelope of the house in place by early April, the team began the installation of house systems. What was once a sketch on paper was now taking shape, and the occasion was marked on April 7th with an official “ShedRaising.” On hand to see the unveiling were David Cronrath, Dean of the School of Architecture, Planning & Preservation; Darryll Pines, Dean of the Clark School of Engineering; University President Wallace Loh; and Dr. Richard King, US Department of Energy Solar Decathlon Director. The event celebrated the work already competed, the people who lent their support, materials and know-how, and also served as a peprally for the coming months of round-the-clock work. 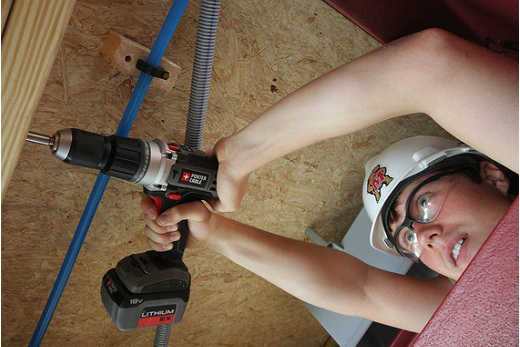 BUILD, BABY, BUILD (MAY AND JUNE)
There is no rest for the weary, especially when you have a solar house to build on a concrete timeline. With the ink still wet on their final exams, the team continued full bore on construction, often working more than full-day stretches, seven days a week. Since the modules’ arrival, the crew has taken one official day off: appropriately, Independence Day.

Within a matter of weeks, installation of exterior doors and windows, translucent wall panels, interior walls, mechanical, plumbing, and electrical systems began. Exterior siding was being prepped and stained. With framing and close-inspections achieved, the team was able to continue forward. Vegetation, which had been nurtured from seed for months, was starting to look recognizable. And as the temperature started to soar on the construction site, the team sought respite in their water bottles and brief breaks in the air-conditioned trailer. 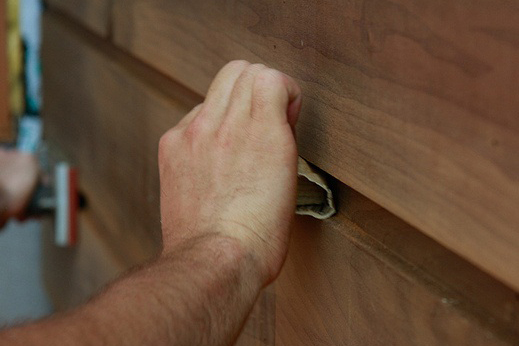 THE DEVIL IS IN THE DETAILS (JULY AND AUGUST)
Gradually, the house’s exterior elements were added. With framing and close-in inspections behind them, the team moved on to insulation, drywall, and painting. Big installation days included the arrival of the PV panels, as well as the green roof, which was installed on a sweltering day in early July. WaterShed’s pergola, which will support some of the beautiful home-grown vegetation, as well as the constructed wetlands, were also starting to take shape. Behind the scenes, many of the houses unique and intricate systems were being perfected and tested, such as the interior liquid desiccant waterfall.

Communications and marketing efforts shifted into high gear. The team headed back to the classroom to finalize the tour route, design house signage, and fine-tune WaterShed’s message. The steady trickle of reporters to the construction site provided a dry run for students and faculty to practice their messaging for the competition. July also witnessed the creation of architecture, engineering, marketability, and general tour videos by the team. Transformed momentarily into a finished home, the house and its landscapes hinted at the stunning and sustainable home thousands would come to see on the National Mall in September. 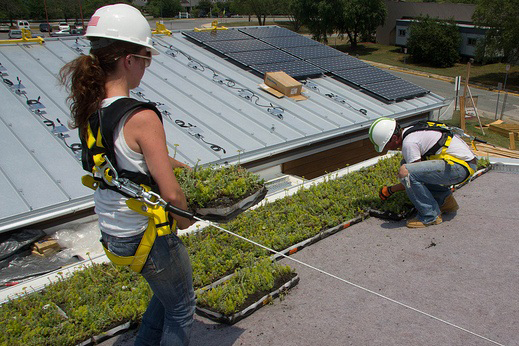 ONWARD, TEAM WATERSHED:
It hasn’t all been rosy; 70 mile an hour winds, late or missing deliveries, and elements that required several attempts to get it just right, the team has occasionally been put to the test. But with just over 30 days until the decathlon opening ceremony, the team continues to push themselves to the finish line, now finally in sight. In a few days, the dis-assembly process will begin as they prepare the house to be shipped to the competition site. On September 13th, the house will be loaded onto flatbeds, taking a short but slow drive down to Potomac Park on the National Mall. It’s there that team WaterShed will complete their mission of sharing their ideals and ideas about the future of sustainable living. Best said by Amy Gardner, Principal Investigator, at the ShedRaising, “We intend to take first place, but more importantly we intend to change the way people live on this planet.”