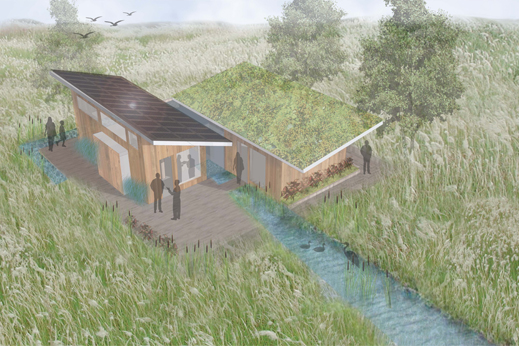 Water is a precious resource that can and should be integrated into the design of our built environment
Image Credit: Team Maryland
Water is an infinitely cycled and precious resource, that is so essential to human life that safe and clean drinking water is considered a human right by the United Nations.

WaterShed’s namesake element is literally central to our design. The preservation and purification of water is critically important to North America’s largest estuary, the Chesapeake Bay, which touches the lives of nearly 17 million people on the East Coast. Although vast bodies of water cover roughly 70% of the globe, less than 1% of the world’s water is comprised of accessible fresh water. The connection to water for inhabitants of the Chesapeake Bay watershed has never been more important than now, as population growth places increased demand on the resources and resilience of the Bay.

With over 100,000 streams, creeks, and rivers in the watershed, a Chesapeake Bay tributary can be reached in less than 15 minutes from nearly everywhere in the watershed. This immediacy is a concept that drove the design of WaterShed, which not only harvests and recycles (conserves) energy, but water as well. By harvesting rain water with the two shed roofs and recycling grey water with the treatment wetlands, WaterShed’s inhabitants have the ability to take ownership of their water rights and responsibilities.

For more educational information about water, please visit this USGS site on water use.