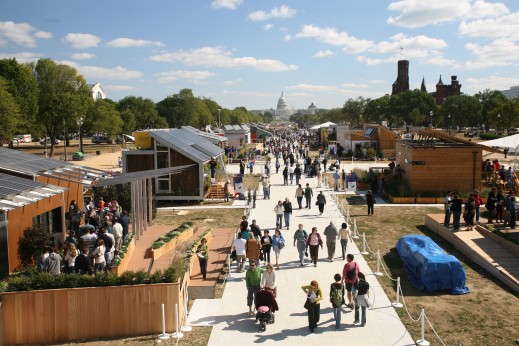 The U.S. Department of Energy’s Solar Decathlon is a biennial competition challenging 20 student teams from universities around the world to design and build houses powered entirely by the sun. Over ten competition days, the teams compete in ten different events such as architecture, engineering, and affordability. The team with the highest overall score is the winner. Each day the winner of one of the ten contests is publicly announced, providing the opportunity for individual recognition among the decathlete teams. The winner of the 2011 competition will be the team that best blends affordability, consumer appeal, and design excellence with optimal energy production and maximum efficiency.

This year’s competition will be on public display in the solar village at West Potomac Park, Washington, DC from September 23 – October 2. The house entries will be judged in subjective contests such as market appeal, communications, and home entertainment, and objective measured tests such as comfort zone, hot water, and energy balance. The houses are on public exhibition with the intent of educating visitors about environmental issues, emerging sustainable technologies, and energy-saving measures.